A resident of Gyumri got an apartment. '' AM '' Law Firm recorded another success in the judicial system 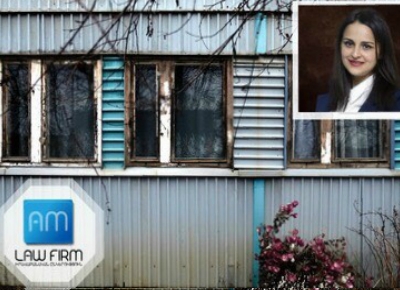 
A Gyumri resident applied to "AM" Law Firm, claiming that he and his family had been hit by the earthquake.

The latter has for years rebuilt their wagon cabin, making a dwelling house and registering his rights on the property. In 2014, in accordance to the Government's plan of apartment allocation, the father of the client of  "AM" received a certificate of purchase of apartment, which set the deadline of 2015 for the purchase of the apartment. In case of possession of the certificate, the beneficiaries were required to obtain an apartment and submit to the public body an appropriate document certifying their rights.

The family members offer the citizen to sell the apartment he owns by the right of property.

The latter, finding no problem, decides to help his family.

They sign a real estate contract, under which the rights were subject to state registration. Before concluding the contract, they agree in advance to return the money after the government has communicated the purchase price and they will conclude an apartment donation transaction by registering the rights of the client of "AM" Law Firm on the real estate.

A citizen has been urging them for a long time to return his property and sign a donation agreement, but some members of his family have categorically refused, violating the prior agreement.

By the way, injunctions have been imposed by courts on the basis of requests from several banking and credit organizations; which made the job even more difficult.

After nearly two years of futile negotiations, the citizen decides to apply to the "AM" Law Firm.

During the examination of the case, the advocates of "AM" Law Firm concluded that it was a false transaction, where the real purpose of the parties was not the alienation of the apartment. The contract is a false contract since it was signed, because the signatories of the contract tried to distort deliberately the reality. The parties had to create the illusion of a legal relationship and show the public body that its claims were fully satisfied, thus hiding the true motives of the transaction.

During the trial, "AM"'s attorneys provided extensive evidence and argued that the apartment purchase agreement was not a voluntary act of the parties to the transaction, which would express their real desire to acquire the rights by alienation.

After reviewing the case, the judge of the district court of Yerevan Tatevik Stepanyan, decided to apply the consequences of the cancellation of the transaction, invalidate the public registration and restore the exclusive rights of the client of the "AM" Law Firm as the owner. Thus, the resident of Gyumri was able to recover the apartment he owned.

The court recognized the publication made by the former ...
Feedback
“AM” law firm is distinguished by its experienced specialists, by the professional and high quality work done, by its willing and responsible attitude towards its clients. The Company quickly and optimally solves the issues and the problems arisen by saving customer’s time.