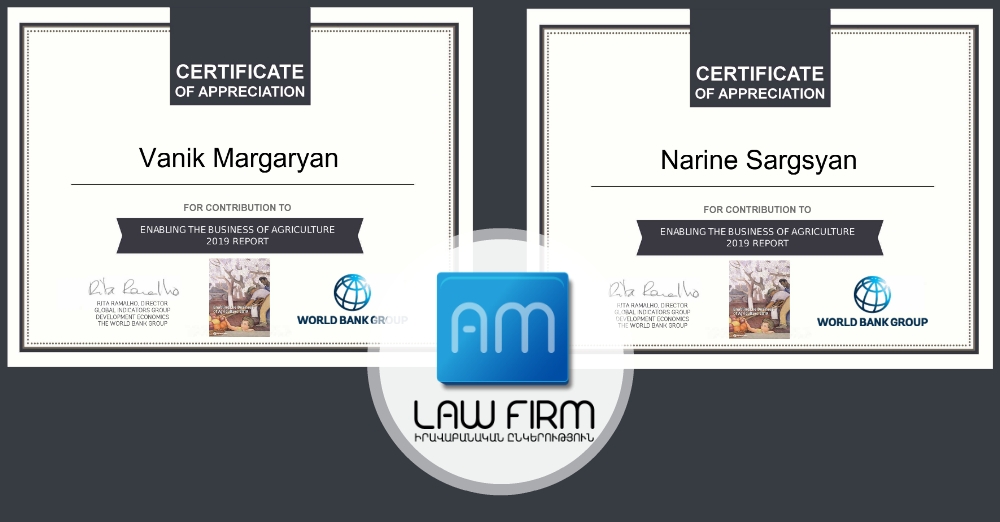 
The World Bank has sent a formal letter of appreciation to the “AM” Law Firm, noting that the information provided on the promotion of agricultural conditions in Armenia has been essential for the preparation and analysis of the 2019 EBA report. The Bank issued special certificates to “AM” partners Vanik Margaryan and Narine Sargsyan for their invaluable contribution to the aforementioned report.

The purpose of the World Bank's survey is to examine each country's legislative framework, including issues of lending and regulatory oversight of banks, microfinance organizations, financial cooperatives, and so on. In 2018, similar surveys were conducted in dozens of countries, including Armenia.

On the basis of the data obtained, comparative analyzes were carried out and the main conclusions were formulated in a report providing information to policy makers at the national level for the development of policies and normative acts on agricultural and agri-food development.

Since 2013, the World Bank has been implementing the Business Development in Agriculture (ABE) program, which publishes reports on sectors and conditions of agriculture in various countries around the world. The agricultural sector plays a key role in the World Bank's two most important goals: eradicating extreme poverty and promoting universal prosperity.

Feedback
When I first applied to "AM" law firm, I was ready to pay a pretty significant amount of money for their services. I was surprised to hear that the case was simple and a lawyer’s assistance was not necessary, and why waste money. Indeed, my problem was resolved for free. Their honesty does surprise me.