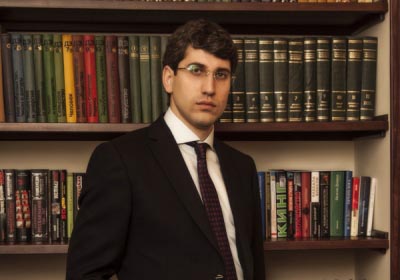 
The lawyer commenting on the behavior of alternative punishment enforcement employees.

“It is a crime made by private persons, a serious systemic failure in general,” this is how Managing Partner of "AM" law firm, Doctor of Law Grigor Minasyan characterized the incident with 32 year old Arman Gasparyan during his conversation with «Aravot» yesterday. It must be recalled: Arman Gasparyan had apllied to Human Rights Defender of RA informing that employees of Ministry of Justice had beaten and offended him. He also had presented to the Defender a recording which as per Arman proves the incident. The young fellow informed that on 24th of March approximately at 13:00 o'clock he brought his friend to the building of execution of alternative punishments of Ministry of Justice. The employees of that institution invited him to a room where 4-5 persons in uniform were present and who used violance against him.

Later on an official investigation in regard to that incident was appointed. To the question of «Aravot» on what steps should be taken by corresponding bodies Grigor Minasyan answered: “I think, special investigation service shall conduct operative and objective investigation, whereas the Ministry of Justice should consider such problems in its structure more attentively and more thoroughly. The society has been aware of the infringements of law and the violance used in detention institutions for decades, but the fact that those workers of alternative punishment enforcement actually beat a person is painfull news”.

The observation that everybody knows that such methods of work are applicable not only in justice system, but also in RA law-enforcement system, is lately being spoken loudly about. However the problem is not being solved and the traditions of Soviet Union persistently maintain in law-enforcement system of RA. Then what is the problem? Our guest objected that the violence used in police and detention institutions has essentially decreased. “Despite of that, soviet traditions are partially preserved in prisons. Concerning probational alternative punishment service, it is a new system, which spread out from Anglo-Saxon countries to Roman-Germanic countries, then was imported to Post Soviet territory, including Armenia. As this system should tend to rehabilitate person who has committed a crime, provide psychological support, the penetration of violant soviet manners into this newly created and developing system is more unclear and unacceptable. As for the reasons of such phenomenons, then the traditions inherited from closed systems, bad administration and the criminal perceptions of individuals about their authorities should be indicated.”

To the question what real changes are needed Grigor Minasyan responded: “For real changes it is necessary to bring into life the strategy of judicial reforms, confirmed by the President of Republic of Armenia. Namely, to implement the confirmed program by effective management and to continue the consistent cooperation with OSCE and other structures for the purposes of ensuring the compliance of the probational service to international standarts.”

The court recognized the publication made by the former ...
Feedback
I really apreciate how “AM” Law Firm team cares about its clients. The attorneys on criminal cases show high responsibilty, effectiveness and willingness to react in detail to every issue that can be met during the case.