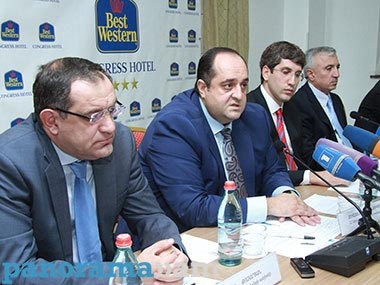 
What issues worry  future legal professionals of Armenia: constitutional control of the laws, expanding the scope of the people eligible to apply to the Constitutional Court, fixing the institute of local referendum in the Constitution, fixing the labour right in the future Constitution, the demand for mandatory compensation for the damage caused to the environment and etc. These and many other issues were addressed by the Armenian students participating in “How to reform the Constitution?” student competition organized by AM law firm.

It is worth mentioning that about a month ago AM law firm invited young legal scholars to present their comments and suggestions on the Concept Paper on RA Constitutional Amendments on a competitive basis. Today the results of the competition were summarized and the prizes were given.

“Our firm has always been guided by the principle of providing high participation in the important public events.  From this perspective the involvement of legal community in such important process as the constitutional reform discussion is rather significant. Regardless of their political positions the legal experts shall define and present the problems to the public. Therefore, we consider it important to make the voice of the students heard,”-said Grigor Minasyan, the managing partner of AM law firm during the award ceremony of the competition.

According to him the aim of this competition was to understand how the Constitution should be in order for the life in the country to be more prosperous, the laws more protected; the governance of the state and the political processes -more effective.

He mentioned that the interest in the competition was rather high: several dozens of students from various universities participated in the competition.
“The students presented rather interesting proposals. Thus, they will have their input in the development of our state,” - said managing partner of AM law firm.

Five awards were given. In the beginning three places were to be awarded however according to G. Minasyan the applications turned out to be very interesting and thus five awards were provided. The winners received computers and other presents. They were also granted the opportunity to work for three months in the leading law firm.
RA Minister of Justice Hovhannes Manukyan was also present at the award ceremony of the competition.

“It is very nice to see that students also take part in such important process. You are the future of our state. In future, we are going to hand in everything to you. I stress the importance of your participation in this process as the process can only benefit from your involvement,”- the Minister said.

The Minister of Justice also stressed the importance of the involvement of the private sector in the discussions on the constitutional reforms. “AM law firm is a private sector institution and the organization of such project is not directly included in its activities, nevertheless the firm considered it important to organize this event. This testifies that there is public involvement in the process and it will result in better quality. The active involvement of civil society in our country is essential and we are going to continue in this way,”- the Minister said.

Gevorg Danielyan, the member of the Specialized Commission for Constitutional Amendments, also welcomed the initiative of the firm. “It is welcoming that the involvement of legal experts in drafting legal documents is gradually rising which makes the process much more effective.”

The students thanked AM law firm for organizing such an important competition for young legal scholars and providing them with the opportunity to voice their ideas in regard to this important issue of the state.

Source: http://www.panorama.am/am/law/2014/10/08/am/
Feedback
On behalf of the board of directors of Sanitek Group, on behalf of Sanitek’s Team, and on behalf of myself, I would like to thank you for the outstanding and unsurpassed support you have given us since our operations have commenced in Armenia. Your expertise, know-how, commitment, and dedication have aided in the success of our operations in the country. I would like to thank all your team, whom we consider our friends and family for all late hours they have worked pertaining to Sanitek. With no qualm, I would highly recommend any international investor or multinational to use Lawyer Am as a partner in Armenia.