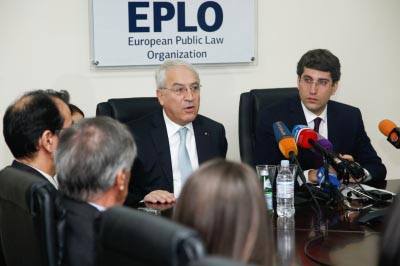 During the official inauguration the President of the Board of Directors of EPLO, professor Spyridon Flogaitis and the director of the Armenian branch, PHD in Law Grigor Minasyan gave a speech.

Grigor Minasyan especially mentioned. “Various difficult questions related to the development of the Armenian legislation can receive their answers with the expert support of the leading lawyers in Europe involved in the professional network of this organization”.

During his speech professor Flogaitis said. “The opening of our first and the only branch in the region will contribute to the development of the public law in Armenia. It is in very good hands, in the hands of those people who have  longtime experience and good imagination of what we want to develop in the member countries and in the world”.

The wind damaged the greenhouse, the loan was left without ...
Feedback
On behalf of the board of directors of Sanitek Group, on behalf of Sanitek’s Team, and on behalf of myself, I would like to thank you for the outstanding and unsurpassed support you have given us since our operations have commenced in Armenia. Your expertise, know-how, commitment, and dedication have aided in the success of our operations in the country. I would like to thank all your team, whom we consider our friends and family for all late hours they have worked pertaining to Sanitek. With no qualm, I would highly recommend any international investor or multinational to use Lawyer Am as a partner in Armenia.