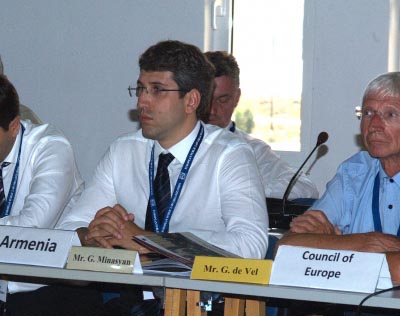 
The delegation led by Grigor Minasyan, the Director of the Armenian branch of the European Public Law Organization participated to the meeting of the Board of Directors of the renowned international institution, members of which are representatives of the governments of 14 European countries, 6 senior officials of international organizations and leaders of the 64 best universities in the world.

The conference entitled "Rights without Frontiers: Citizenship and Immigration in Europe" took place after the meeting of the Board of Directors, during which the professors of the leading European universities presented the aspects of the legal regulation of the status of immigrants in Europe. The Armenian delegation also participated to the conference, part of which was also Narine Sargsyan, Chief legal adviser, advocate of "AM" Law Firm.

We would like to remind that European Public Law Organization is an international organization the purpose of which is the creation and dissemination of knowledge in the area of public law  and European values worldwide. In 2011, Armenia became a full member of the organization and approved the agreement on the basis of the European Public Law Organization, signed in Athens. At the same time Armenia is the first and only country in the region, where acts the branch of this influential international organization, the host company of which is "AM" Law Firm.