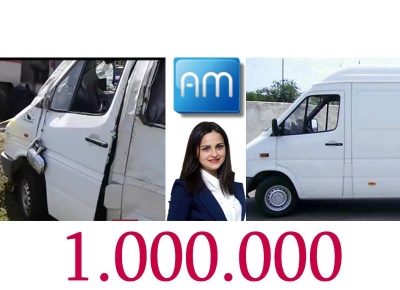 
One of the well-known insurance companies in Armenia was refusing to duly compensate the damages caused to "Hyur Service" LLC as a result of a car accident.

According to the initial report of the damage assessment in the sector CMTPLI, the damage to the vehicle was unjustly estimated 463.700 AMD. Disagreeing with the results of the preliminary examination, the company "Hyur Service" applied to the Armenian Motor Insurers Bureau to request a double examination. As a result, it was confirmed that the damage caused to the vehicle amounted to 1,416,000 Armenian drams, i.e. about 1 million drams more.

The insurance company did not agree with the conclusion of the expert, applied to the court demanding to free them from paying insurance compensation more than 463,700 AMD.

As a result of the professional work of lawyers of «AM» Law Firm and especially advocate Paytsar Kocharyan, on August 8, the court completely denied the groundless claim against "Hyur Service", instead of it, satisfied the counter-claim submitted by «AM» Law Firm and took a decision to seize 1,416,000 AMD from insurance company in favor of Hyur Service, at the same time adding to that amount the interests provided by the Article 411 of RA Civil Code.

Thus, «AM» Law Firm ensured another victory in the court for its customer and did not allow a well-known insurance company to take away one million drams from "Hyur Service" and the interests caused by delayed payment of that amount.

The court recognized the publication made by the former ...
Feedback
The youth and experience of "AM" lawyers is excellent combination of high professional skills, which help to find a solution to any legal problem.