The pretrial detention was replaced with a bail of 5 million drams: another victory by "AM" 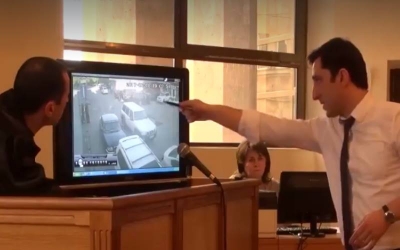 
The pretrial detention was replaced with a bail of 5 million drams: another victory by "AM"

An armed incident took place on June 8, 2017 at one of the food stores in Gyumri, which resulted in Aramayis Poghosyan being arrested and put under pretrial detention. The latter was charged with committing hooliganism with the use of weapon during the incident, as well as with leaving the incident place with the threat of violence against the police officers.

Still, during a court hearing in March of this year, the video record of the incident was examined, in which it is visible that the defendant uses a weapon after he is attacked. The defense, represented by AM partner and advocate Levon Sahakyan, filed a motion to the court, requesting to clarify which actions of Aramayis Poghosyan are being qualified as hooliganism. In response to the question, the prosecutor stated that the actions taken after he was attacked.

According to the defense, the actions directed against a particular attacker cannot be qualified as hooliganism after the attack, despite the fact that it was done in a public place. Therefore, Aramayis Poghosyan's actions were aimed at a specific person and were conditioned by the emotional state following immediately the attack by that person.

During the hearing of June 1, 2018, presided by the Judge Vardan Grigoryan, Aramayis Poghosyan's advocate Levon Sahakyan motioned either to invalidate the pretrial detention or to replace it with bail. The court granted the motion by replacing the detention with a bail of 5 million drams.

Thus, due to the well-founded arguments of AM law firm’s advocate and the independence of the judge, the person, being unjustly charged with a grave crime, is free.

Legal and illegal restrictions on service parking spaces: ...
Feedback
"AM" law firm is currently the leading firm and addresses all the issues imposed with liability typical to a leader. The cooperation with this firm is guarantee for security.